Mary Barron is the Flying Arts Artist taking part in the Sam Rit Residency and Cultural Exchange. Here she talks about how her latest workshop went in this rural Thai community.

The workshop participants have been busy lately preparing for a big local festival to bless the fertility and productivity of rice crops. I spent some very enjoyable time with them helping out at the temple.

The day of the festival arrived. There were beautifully decorated marquees in the temple grounds, lots of food being served, and wonderful traditional Thai music was being played. The musical instruments are magnificent works of art made with incredible craftsmanship. I greatly enjoyed sitting, listening to the music and watching them being played.

There were also several stalls at the festival also. I had a great time selecting some beautiful Thai skirts from the stalls. They were all so beautiful that I ended up buying more than I had intended, as I could not decide between them! A group of locals gathered to help me, giving advice on which ones to purchase. The locals really appreciate it when I wear my Thai skirts. 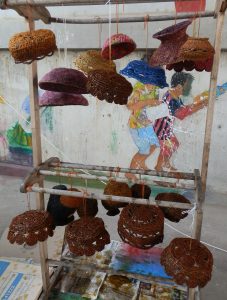 After the festival, the ladies were keen to get back into creating. More amazing new works came in today; they are really branching out and expanding on the basic techniques I had taught.

In this workshop, we started the process of coating the coiled newspaper pieces with Shellac to seal and finish them. It was great to see them all hanging on a drying rack after being dipped. We also tried painting some pieces before putting the Shellac on. There were some spectacular results.