Using words to create movement inspires me. Objects, like words in a poem, can come to life.
They can evoke memories. Their meanings can be new.
They can create a sense of movement without there actually being any.
They can create humour through the juxtaposition of words around them.
So often, as an artist, I’m asked to provide an artist statement to explain my artwork.
More numerously than not, my response is poetic. why? I don’t know, I just find it easier to break down my explanation into simple groups of words rather than complex sentence structures.

The Recycler by Christopher Trotter

The Recycler sees life – life everywhere,
Lying in rack and ruin.
He dreams of injecting old hearts with diesel,
So they too can breathe again.

He says they are not dead, but merely misunderstood.
Old and Worn,
Flogged out, rusted and buggered. 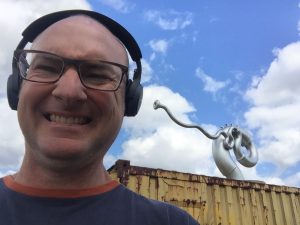 Trotter’s professional art practice began in 1990 exhibiting in galleries along the east coast of Australia. However by 1994 he found himself focusing on the creation of multi scaled public artworks.
Using his architectural training and knowledge, Trotter has produced works that are innovative and engaging. Not only does he create high impact art pieces, he also has the ability to create intimate discovery works that engage and delight. His works can be stand alone sculptural pieces, as well as works that are built into the very fabric of a building and perform a function.

Since 1994 Trotter has created over 40 public works for government, councils, universities, and developers. Many works have been commissioned as high impact tools for the promotion of cultural tourism.

Trotter has exhibited both nationally and internationally since 1992.