Imagine this scenario; a seven day straight drawing workshop, averaging 8.5 hours per day, in 38 degree heat, mostly with the same 20 students ranging in age from 83 years to a 10 month old. Now add to this mix, the fact that are all members of a very motivated arts group with varying ranges of skills and abilities – some of whom are art teachers and retired art teachers and a quirky mixture of others sans any arts background what-so-ever. Now, picture in your mind’s eye, the outcomes of this ensuing cocktail. And, how would you deliver a cohesive workshop to such a disparate and eager group? The answer my friends, is blowing in the wind, somewhere on the western red plains of Charters Towers. Actually, I embraced this ‘not knowing what to expect’ challenge. Some may think it could have been an ambush in cowboy country. I adapted very quickly to the circumstances and hit the ground running flanked with a devoted group on both sides. 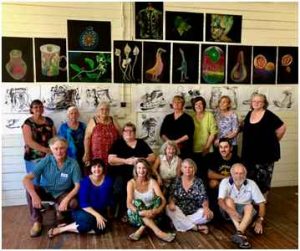 It was quite funny when I first entered the room on day one as they all looked at me in astonishment ~ they were expecting another Scott Maxwell who hails from Adelaide. The groups collective googling produced a very different face (and style) from the internet. I proclaimed that I fly high with Flying Arts, however, fly well under the radar on internet search engines and am virtually non existent in social media circles. As a consequence, from that point, I felt I had to establish credibility by displaying a brief overview my visual arts folio, backed up with real time demonstrations, answer any questions with certainty and give one to one guidance so that everybody (even the trained professionals) kept up with the unrelenting pace that endured each day. Coincidentally, a lot of my artworks were produced around the Towers in the early 80’s, so it was nice to share the connections. 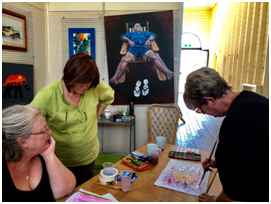 The students were great to work with and must be praised for keeping the energy flowing through the early summer heat… every day. Each and every one of them produced some truly amazing works of art. The self proclaimed non-artists evolved into painterly maestros of the paper. I think they even enjoyed the group’s self critiquing. I always got a kick out of seeing positive reactions when students produced something they were really proud of. It just worked a treat!

On day five somebody said aloud that we were doing gesso today and I agreed that that was a good idea. She said it was my idea because it was in the schedule for day five. I retorted “what schedule?” I had completely forgotten that I emailed a structure for each day eons ago. I asked the group if I had been adhering to this rigid schedule for the past 4 days. In unison the chorus rang out with a resounding “NO” with lots of laughs. Apparently what I was doing was better than the schedule… I hope. The spontaneity of the classes changed daily ~ it included a field trip into the rock scape in twilight hours, a life model, detailing several inanimate objects, having another group coming in and ‘documenting our creative spaces’ and a meeting with the Mayor at an art exhibition opening that culminated into a class concept design for four new street roundabouts being constructed in town. 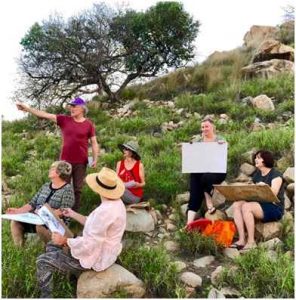 I could not help repeating myself everyday to the class, that this arts group would be the envy of every town and city in Australia. They have been gifted a wonderful heritage assortment of buildings, rooms and courtyards with so much incredible potential. After each session we would hang the results onto the walls, corridors and entries and collectively the renderings looked so strong and dramatic. The artworks will be kept in position for the next week so that locals and visitors can see the results. When Australia was the wealthiest country on the planet, Charters Towers, with its famous stock exchange, was colloquially called “The World” because it had everything. If Flying Arts were to have a regional seminar/conference/multi-workshop to accommodate participants from around the vast North and West of Queensland, Charters Towers would be the logical creative epicentre.