QAGOMA recently staged another chapter of its innovative Art as Exchange program in the stunning and historic Bunya Mountains. As part of this program, Flying Arts Alliance facilitator Jenny Sanzaro-Nishimura was invited to deliver a printmaking workshop. Jenny shares some insights and observations of her experience here.

The Bunya Mountains (Bunye Bu’ru) were magical – the location is a National Park managed by the five groups of traditional owners whose lands border on the Bunyas. The ‘Welcome to Country’ and smoking ceremony that we experienced were extremely welcoming and enlightening with the exchange of information that ensued. The traditional owners explained that pre-colonisation the Bunya Mountains were the equivalent of parliament  for First Nations peoples all over Australia. Their coming together to celebrate the Bunya season every three years was a time for cultural exchange, inter tribal agreements and disputes to be settled, and for marriages and other exchanges to take place. Art as Exchange is an innovative program that can and will forge better communications, collaborations and opportunities in the arts-related fields for educators, artists and arts workers in regional areas in Queensland.

I facilitated a printmaking workshop for the project participants, so that they could make prints related to their experience in the Bunyas. This involved soft ground etching on aluminium plates and drypoint on mylar using non-toxic materials. I provided all the materials needed and my portable press. The processes I used were both environmentally friendly and non-toxic, as I didn’t want to harm the environment. The soft ground is a mix I made myself from beeswax, cooking oil and eucalyptus oil; the etch is non-toxic using copper sulphate and salt mixed in water; and the inks are non-toxic oil paints or etching inks. I shared my recipes for the etch and the soft ground with participants and many of them were excited to try it at home. Each participant was invited to make a print from a found object/plant, or draw into the surface of the plates and create their own image. Some combined both methods, and it was great to see the variety of outcomes that evolved in a short space of time.

The highlight for me was not only the participants’ enthusiasm for the Art ss Exchange project (which was inspiring), but also the passion of the presenters and their enthusiasm for sharing their concerns about keeping, documenting and protecting knowledge, lore/law, culture and the environment through art related education programs and bringing together people of all cultures through Art as Exchange. The Murri Rangers and BPAC members were very enthusiastic about what we are doing and can see that workshops such as Art as Exchange can encourage closer relationships and further between indigenous and non-indigenous Australians. They also recognise that it must be a two-way street, an equal exchange and sharing of knowledge and skills from both sides of the table. To me it is a promising way forward to create a level playing field. 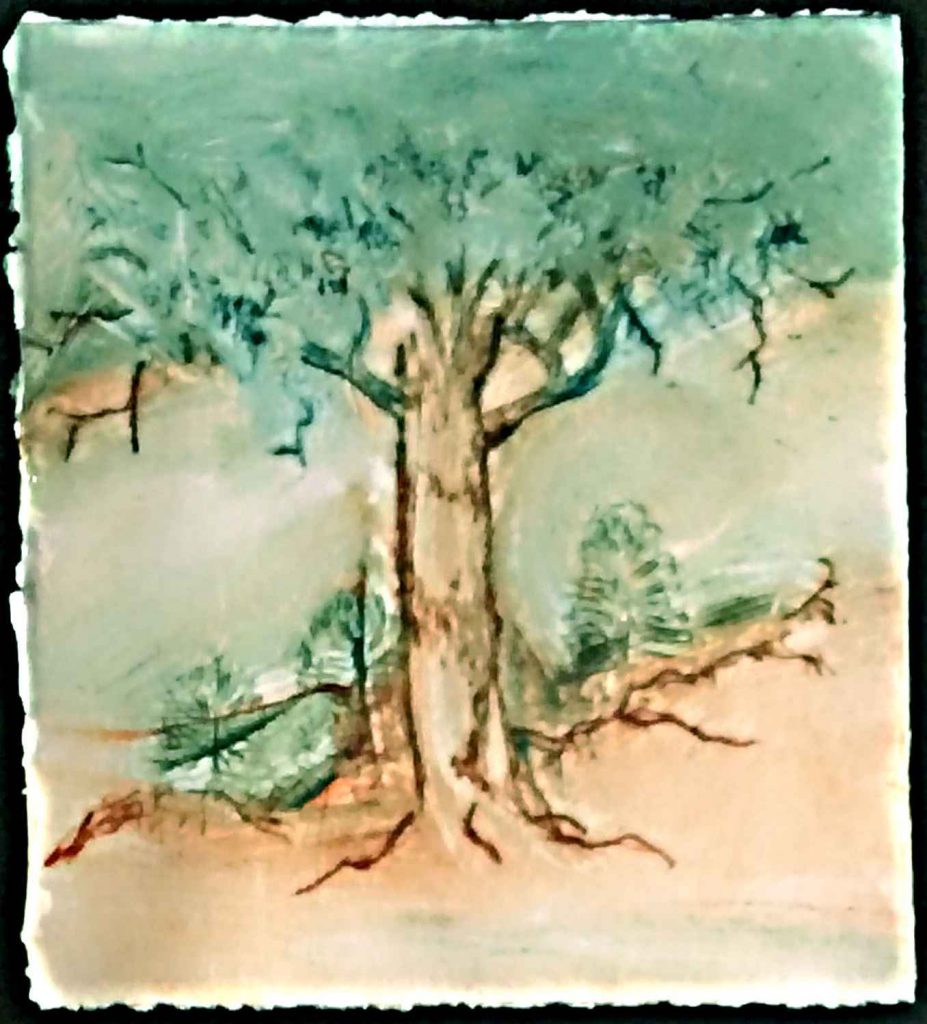 The conference sparked new ideas to use in both my teaching and art practice – more through its presentation and format than through the artistic input, as it was really a gathering of arts sector people exploring/developing new approaches of communicating with or connecting artists, art related organisations, art educators to work cohesively together rather in separate worlds. It has inspired me to look deeper into the environment and talk with the traditional owners whenever possible about their cultural lore and find out more, so that I may work with them and encourage others to learn about the true history of Australia, the richness of their culture and protect and preserve their country and rights. The idea of Art as Exchange is not new for me, because I have initiated and curated two international print exchanges in and around the Pacific Perimeter, based very much on that premise. I can see that this could develop into something similar for regional Queensland.

From the discussions at the workshop, I can see that a very holistic approach has been taken at the outset, and that was carried on throughout the whole workshop. I was just a small part of that workshop, but having art practice included in the workshop gave people a focus on a visual outcome as well as theoretical outcomes. For the five regions involved in this workshop, I could see that communications between artists, educators, gallery/arts workers had opened up, not only among those from their own region, but across all five regions. They were brainstorming with a much greater picture in mind than what they began with and printmaking was part of their research.

I think the planning and development of this project has been very finely tuned. I commend the organisers on the thought that has gone into preparations for the workshop and was glad to see that Flying Arts were included on a consultative level as well as workshop level.

Jennifer Sanzaro-Nishimura has been a printmaker for over 26 years and has been lecturing in print-media at Queensland College of Art, Griffith University since 2004. She was president of Impress Printmakers Studio Brisbane from 2008-14, facilitating their transition into Kedron Substation no 8, now Impress Printmakers Studio and Gallery. She works across most forms of print-media including, relief, intaglio, lithography, monotype, serigraph and digital. She completed her Doctor of Visual Arts degree at QCA in 2013. Jennifer has completed residencies in Manila, Vanuatu and Hawaii and a solo exhibition in Philadelphia. She is a master printer commissioned to print for Judy Watson and Inkahoots and conducts printmaking workshops for Impress, Toowoomba, Lines in the Sand and other community groups, for her sharing skills and collaboration facilitates understanding between people of all cultures. She coordinates & curates international exchange exhibitions such as Vie Du Pacifique-Pacific Life and Vie Du Pacifique II. Jennifer exhibits regularly in group and solo shows, her work is held in public and private collections nationally and internationally. She also works from her studio Cursing Crows Press and is a founding member of Migaloo Press, a group of Brisbane women artists who collaborate, exhibit and produce projects together.