Elysha Rei is the Flying Arts Program Coordinator. Here she gives an update for the start of our Sam Rit Residency and Cultural Exchange Project. 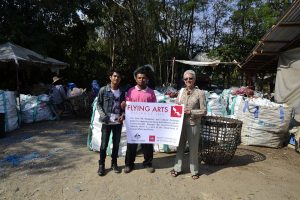 ‘The Sam Rit Residency and Cultural Exchange Project is off to a flying start! Landing in the Kingdom of Thailand just before New Years I was greeted with the warmth of tropical weather and the kindness of village locals anticipating the arrival of artist Mary Elizabeth Barron. The next few days would see me assisting with translating and conducting promotional activities and making sure that the residency was ready for the next 8 weeks.

New Year’s eve was a cultural and gastronomic feast of local pork (slaughtered by the family earlier that day), as well as country Thai music, hay bale seats and crisp Thai beer. This is the one time of the entire year that all family members gather together again in their hometowns, catching up with parents, meeting grandchildren and enjoying each other’s company. It was a privilege to be included in this social embrace.

Mary arrived late on Monday night – 4th January. A welcome party greeted her at the airport, and we then jumped straight into the car for another 4.5 hour drive North East to rural Thailand where the village of Sam Rit is located. The following two days were jam-packed full of activities programmed as part of the residency orientation. This included a tour around the village meeting local community members and learning where the temple, school, clinic and family farm were located. The region is also rich with ancient history dating back 1500 years BC as displayed in an amazing archaeological dig site, as well the the Khmer Empire ruins of the Phimai Historical Park which pre-date that of Ankor Wat in Cambodia.

This historically significant area provides a rich context for cultural exchange between Mary and the women in Sam Rit village. Even the local history of the village includes a legendary warrior woman who successful outwitted Lao soldiers in an escape plan involving rice wine and kitchen knives. It is fascinating and beautiful to see the adoration of female resilience and appreciation as a major part of the culture.

Local lady Bangon has created an amazing groundswell of momentum and anticipation for the series of workshops that will be conducted over the coming weeks. It will be a learning process for all involved – from material research to developing the group dynamics and creating a solid cohort of women who will learn and exchange skills in handicrafts. It will certainly be an exciting time ahead as the project unfolds.