Mary Barron is the Flying Arts Artist taking part in the Sam Rit Residency and Cultural Exchange. The workshops have taken on a more casual format now, with participants dropping by to learn things as the weeks progress. 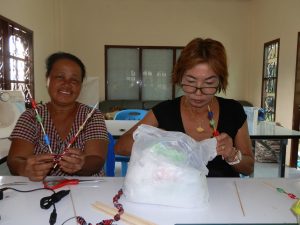 On both Saturday & Sunday I just had some of the participants drop in to learn some things. I get the feeling that this may be the way it will happen in these last two weeks.

On Saturday, a couple of ladies stopped by, so I showed them how to make fused plastic beads. When another came, we moved on to making diagonal weave baskets using packing tape. 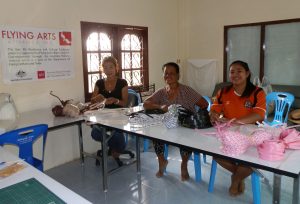 One participant completed hers, but the others had trouble finishing off the tops. We tried for ages but could not get it to work. I have never had this problem with diagonal weave baskets before, although I have heard other basket makers talk about it, so it was very frustrating. It was getting late, so they went home. I made another basket and had no problems, then did a second one just to make sure and again no problems.

On Sunday a couple of the ladies from the day before came with finished baskets. They wanted to do more, so I started them on to making some using the same technique, but with a different size and shape. Neither of these ladies spoke English, so we did everything with hand signals and by demonstration.

One participant finished her basket with no problems, but the other had an issue with the top edge. We realized she had made a mistake with the base. Once we unpicked it and fixed the base it all came together smoothly. She was so pleased and proud of her achievement and I was so relieved! They each took enough materials home to make another basket.